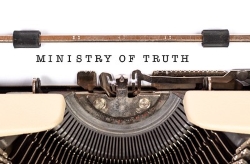 I was educated in a catholic school and subjected to catholic dogma constantly. Fortunately at that time there was sufficient other influences in my life to allow me to gain some perspective.

I quickly learned not to trust those in charge. In fact, I lost all faith in the religion that was being shoved down my throat. The actions of those in authority did not match their teachings. It never does. Dogma relies on blind acceptance and a belief in the one true way.

You’re either all the way in or you’re out. There is an innate need in all of us to belong. Stepping away from the herd is challenging. There is a sense of being judged, pitied and in some cases, hated.

It is safe and warm inside. Don’t question, don’t speak up, don’t doubt. Believe. Believing is belonging. Belonging is comfortable. If heretics get away with their unorthodoxy, others might follow suit. Ridicule and expulsion are the dogmatic leader’s best friends . Control must be maintained by rigid adherence to dogma.

Monty Python’s Life of Brian was such a liberating moment for my soul. It dared to poke fun at religious dogma, hypocrisy and a raft of holy cows. All the major denominations went into a state of apoplexy. It was bloody funny too.

At that time, the Python team were at the forefront of a rebellion against political and social orthodoxy. They encouraged debate and made you think.

Thinking for yourself is hard. Weighing up the pros and cons of an argument takes time. Doubt can be debilitating. Acceptance of the narrative is easier. Thinking is an act of rebellion against orthodoxy and dogma. The arts whether that be literature, film, music, comedy, painting or sculpture have always been one of the bastions of free thought.

Art makes you think. It often challenges preconceptions. It can be subversive, progressive and conservative and triggers responses on an emotional level that dogma cannot.

Cancel culture is dogma in its worst form

Several years ago, the world was horrified when the Taliban started destroying historic statues in Afghanistan. Then, Isis destroyed historic artifacts that were “satanic” and an anathema to their belief systems sparking more outrage. What barbarism and savagery!

That’s what dogma dictates. The erasure of all heretical thought. We’ve seen it time and again. From the communist gulags of Russia to the death camps of Pol Pot. Free thought is forbidden. Eliminate all opposition. It has ever been thus. Can anyone say Spanish inquisition?

Fortunately Western society has evolved so that we live in a pluralist society. The free exchange of ideas and philosophies is a basic tenet of democracy.

Or it was until cancel culture emerged. Cancel culture is the spawn of “woke” social justice warriors. These crusaders can’t abide contrary thought. The world must be in their woke image. Reeducation or elimination of dissident thought is a priority.

The political opinions of JK Rowling, Stephen King or any other celebrity should matter not.

Twitter gives them all a voice. Perhaps it would be better for all of those people to just stick to what they know. In JK’s case that would be all things Hogwarts and thoughts on writing and fiction.

Regrettably most of them have to have an opinion. perhaps they think this keeps them relevant. Twitter is the last place on earth where rational debate can be had, it is infested with “woke” social justice warriors wanting total adherence to their ever narrowing view of the world.

JK Rowling had the temerity to suggest that women were biologically different to those who identify as women but are or were born with male genitalia. It’s hardly a radical opinion. One that a healthy society would allow to be expressed freely and without fear of reproach. The twitternazis (and I use the term deliberately) went insane. Poor old JK copped an enormous backlash. You can never be woke enough. You have to be fully on board. There are no shades of grey ever.

The backlash was vicious and personal. It had to be. Strict adherence to dogma is mandatory. You can listen to a full analysis of JK Rowling’s woke adventure here.

Rowling belongs to the left and aligns closely to a lot of the issues that Social Justice warriors promote. She simply had to be pulled into line. You can have all the free thought you like as long as they’re the right thoughts.

Understanding history in context is an incredibly important part of understanding who we are, where we’ve been and where we might be going. Not understanding the mistakes of the past, condemns us to repeat them. Every country has a checkered history full of villains and heroes. Understanding who they are and how they shaped a nation is important.

Now, SJWs are tearing down statues of all descriptions. Some of these statues are of confederate army icons, some are of slavers and some are of abolitionists (I kid you not). Monuments to fallen soldiers are another target for graffiti and gratuitous vandalism.

At this rate it’s only a matter of time before some bright spark demands that the pyramids be destroyed because they are alleged to have been built by slave labour.

When the past is erased so are the lessons within it.

Cancel the arts unless they reflect dogma

The obsession by the “woke community” with reshaping culture in their image has reached ridiculous proportions. The idiocy is happening so fast I can’t keep up with it.

When you start banning art because it does not meet SJW sensibilities, you’re on a slippery slope.

Cultural marxism is the new dogma

Celebration of difference is a key element of a multicultural society. The maintenance of an accurate record of social norms over time is invaluable. It allows us to see where we’ve been and how far we’ve come.

We now live in an age where many elites and social justice warriors want us to be the same in every respect. Gender is no longer biological. History is malleable and art must meet new norms.

We are in serious trouble unless more people take a leaf out of JK Rowling’s book and say enough is enough. Cultural Marxism is dangerous dogma, no less dangerous than totalitarianism in any form.

Be yourself. Be proud of it and don’t take shit from anybody.

Thank you for taking the time to read my thoughts about Dogma.  Please share it on Facebook, Twitter or any other platform that you hang out on. Please leave comments. I read them all.
As a freelance writer I need all the help I can get. To support my writing please visit my about/support page to find out how you can help ( I don’t expect you to put your hand in your pocket)