How Big Is The Box You Live In? 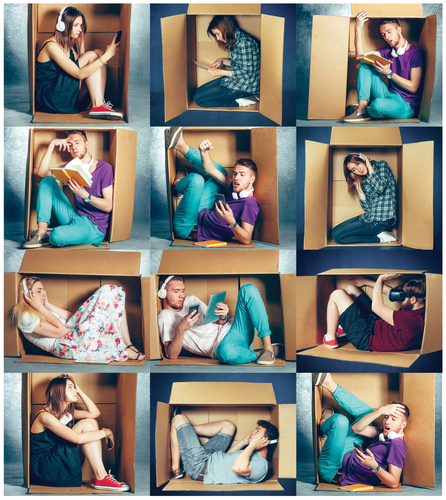 We all live in a box.  The box defines our belief system, our values and our prejudices and fears.

We define how big the box is by the choices we make and the truths we believe.

When we decide that  an idea or a concept is not worth exploring because it challenges our belief systems the box just gets a little bit smaller.

It’s nice in the box.  Comfortable..cosy even.  But, it is a box, nevertheless.  A box, that will grow increasingly smaller, drab and confining as time goes on.   The cosy nice confortable world that you build for yourself that insulates you against uncomfortable thoughts and ideas is nothing more than a prison. A self-made, self confining self limiting straight jacket that  will limit your life experience.

We all need to push the boundaries and welcome alternate views of life, history, politics and anything else that you care to name.  We need to test and explore concepts and subject them to rigorous analysis involving clear thinking.

If you’re honest with yourself, allowing aberrant thoughts that challenge your beliefs and values is quite a dificult thing to do.  I know that the process for me has been difficult.  Many things I held to be true three years ago have proven to be fantasy at best but in many cases are simply outright lies.

Some things, like the amazing fireproof passport found amidst the debris of 911, or Kennedy’s head snapping back and to the left nagged away at me.  But the constraints I had allowed my mind to impose prevented me from  exploring those nagging questions.  It wasn’t until I dared to poke at those self imposed walls surrounding my thinking  that I started to question many of my own beliefs and began to welcome other viewpoints.

Slowly, I sorted the wheat from the chaff.  I found nuggets of truth in unlikely places, hidden amongst rhetoric, and hysterical chest beating.  I began to assemble some basic facts that were being verified across various channels with wildly differing outlooks and viewpoints.  Those facts challenged me greatly but they also helped me to grow.

Strangely, in a weird almost abberant way, my new view of the world helped restore my faith in humanity.  Gradually, I realised that most people are basically good.  Sure, they have differing views about many  things.  Sure, they’re going to want society to progress down the track that they believe to be right, but most people will go out of their way to “give someone a fair go,” as we say in Australia.

Sadly, while most people are basically good, they aren’t trained to question.  That’s why I am constantly amazed and thrilled to find another “fellow traveller” seeking truth ehind the lies.  Every day now I find more people refusing to accept the official narrative, questioning everything and being loud and proud about it.   Not all of them are right but they’re alive, awake and standing up to be counted.  Whether its Tracy Beanz relentlessly tracking child trafficking as well as documenting the unfolding events in the USA,HA Goodman doggedly pursuing the Clintons and the DNC,  Ed at the Outer Light chuckling his way through the daily news, Lionel Nation waxing lyrical about anything and everything, Col Royson Potter speaking plainly and directly about truth in Government, the architects and engineers for truth about 911, or literally millions of others, they inspire, educate and challenge me to question more.

While, I might have mellowed in my views on humanity, my tolerance for zombie like thinking and meek sheep like acceptance of the official narrative has grown very thin.

Once I started to broaden my horizons, I realized that the powers that shouldn’t be want us to imprison ourselves in our own restrictive mindset.  They want us to argue over trivilaties and be distracted by the minutae of policy while they systematically rape and pillage the world.

Once you expand your thinking, you can see the big picture and  you can really see who the enemy is.

Where Should You Start?

To be honest – you already know.  What doesn’t ring right to you?  Stop ignoring it – push those walls back and start investigating.  If you’re still unsure, here is a list of subjects that you might like to pursue.

Ask the questions – do your own research and be prepared to expand your thinking. One of the things I learned fairly early is that once you open this Pandora’s Box, one subject inevitably leads to investigating another – wie result being that  the walls of the box I live in keep getting further away from view.  That’s liberating and terrifying.  I like that .  I like it a lot