Were the connections between Rudd and Assange Coincidence or Conspiracy? 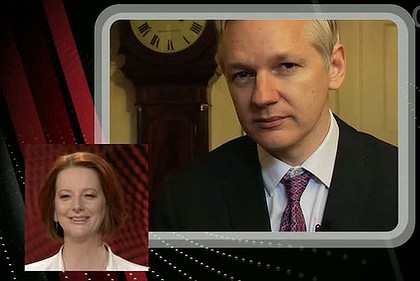 I’ve looked at this every which way and the questions persist.  There already is much evidence to suggest that the CIA was involved in the overthrow of the Whitlam Government back in 1975.  The series of coincidences surrounding the fall of Kevin Rudd and the  Deep State attacks on Julian Assange on multiple fronts certainly give cause to ask some hard questions.  Where do they lead exactly?

A close examination of the material suggests that Gillard’s sworn evidence before a Royal Commission concerning the legality of her actions at best might be described as vague and dubious.

At worst it implies that Julia Gillard was potentially compromised by her actions an d that people “in the know” may have been able to use that knowledge to exert pressure to their best advantage.

Does this matter? It was all a long time ago. Everyone has moved on. Everyone, that is, except Julian Assange. Besides, politicians should be held to the same exacting standards that they seem to think that we should adhere to.

So let’s lay some dots out  and if we can’t quite join them, see where they might lead.

The Connection Between The Australian Union Movement and the CIA

The CIA has a history of infiltrating union movements. It’s infiltration and manipulation of American Unions is well documented. Australia is of critical strategic significance to America and the ongoing presence at Pine Gap makes it double so. Naturally, the CIA would seek to influence and manipulate opinion from both ends of the political spectrum as it does the world over.

The infiltration of Australia’s union movement is not as well documented but can be found when you go looking for it.

A long forgotten radio show produced in the 1980’s , watching brief investigated the CIA’s role in Australia. The fifth part of the series was dedicated to the CIA’s infiltration of the union movement.

The transcript of this radio show makes riveting reading, not only for its content, but as a stark reminder of how far mainstream “journalism” has slipped since the mid nineteen eighties.

Some key takeaways from this program are that the CIA are heavily involved in the Australian Trade Union Movement and that the AWU in particular has been a CIA target.

The links between elements of the Trade Union movement and the CIA again were brought to light by the WikilLeaks releases known as Cablegate. Among these documents was evidence that ACTU and Labour party officials were courted by the Americans. Some, including former Prime Minister, Bob Hawke and key Gillard backer Mark Arbib, readily supplied information to the CIA, seemingly on a regular basis.

It is indisputable that the CIA had established strong links within the AWU, the ACTU and the Australian Labour Party. Those links can be traced to members of the Rudd/Gillard governments and in particular ALP “numbers man” Mark Arbib.

During Julia Gillard’s Prime ministership, there was a constant undertone of smear and innuendo. Much of it was “dirty politics,” played to an art form by Tony Abbott and the opposition. Some of it refused to go away. So much so, that a Royal Commission was set up to look at several transactions and elections that occurred in the early nineties when Julia Gillard was in a relationship with Bruce Wilson, the then or soon to be secretary of the AWU.

The inquiry recommended criminal charges against several people involved in the transactions but found Gillard to be an innocent party, in part due to Gillard’s own testimony. Documents now obtained by Michael Smith (Michael Smith News) cast sufficient doubt upon Gillard’s version of events to give rise to a number of questions concerning her role in the matter.

If there was wrong doing, other parties within the AWU would most certainly no about it.

We are left with three primary questions -:

These questions are critical in understanding Julia Gillard’s rise to Prime Minister and the decisions she subsequently made. Until now, there has been very little evidence to support an affirmative answer to the first question. The case has not been made entirely and Mainstream media shy away from looking at it, but Michael Smith continues to dig and he promises that there is more to come.

No one was to know that Gillard’s star would rise as it did, but she was young, ambitious and identified by the CIA “as the most pragmatic of politicians.”

The CIA love “pragmatic politicians.” They use that pragmatism with devastating effect.

Never more so, it would seem, when it came to dealing with the problem of Julian Assange and WikiLeaks.

In a previous article, The Swedish Swamp Creatures who Tried to Eat WikiLeaks, I attempt to show the clear connection between corrupt Swedish politicians and the attempts to smear Julian Assange that resulted in him eventually seeking refuge in the Ecuadorian Embassy in London.

It is my belief, that the end game for the CIA was to lay siege not only to Assange’s physical self but to his character as well. They did not want to martyr him. They wanted to discredit and smear him.

To this end, it would seem the plan was always to force him into permanent exile.

While the Swedes and the British could be relied upon to discredit and harass Assange, the same level of confidence could not be held for Prime Minister Rudd. Assange was an Australian citizen and Rudd had made some statements that appeared to support Assange.

Kevin Rudd swept to power in 2007. Global Economic Crisis better than any other western government. Rudd was nerdy, a policy wonk and from all accounts a bit of a pain in the bum to work with.

While the polls were bad, they were not insurmountable. Other governments have seen worse and held their nerve.

In 2010, the ALP collectively lost it’s nerve and changed Prime Ministers. The coup was swift and brutal. Julia Gillard, backed by the powerful right faction within the ALP, controlled by Mark Arbib was installed as Australia’s first female Prime Minister. The nation was shocked by the suddenness and the political viciousness of the move.

On the face of it Gillard’s rise to power was the result of some nervousness by sitting politicians in relation to poor poll results. Most people accept this without question. Many of the Australia electorate never took to Gillard once she was installed as Prime Minister, believing that the manner of her taking office was treacherous. The expected bump in government popularity never really occurred and although Gillard was able to secure a further term for a minority government.

The Gillard/Rudd years are seen by most Australians as years of wasted political and economic opportunity. There may be a reason other than just political weaknesses.

The dates are intriguing

One has to remember that Julia Gillard had been a practising lawyer before entering parliament. What on earth possessed her to blatantly crucify an Australian citizen with a bald faced lie?

Maybe the answer lies in events that occurred much earlier.

This curious turn of events could all simply be coincidence.

Its strange, nevertheless, how these coincidences all tie neatly together to help strengthen the CIAs grip on the narrative while persecuting one of the few remaining truth tellers.