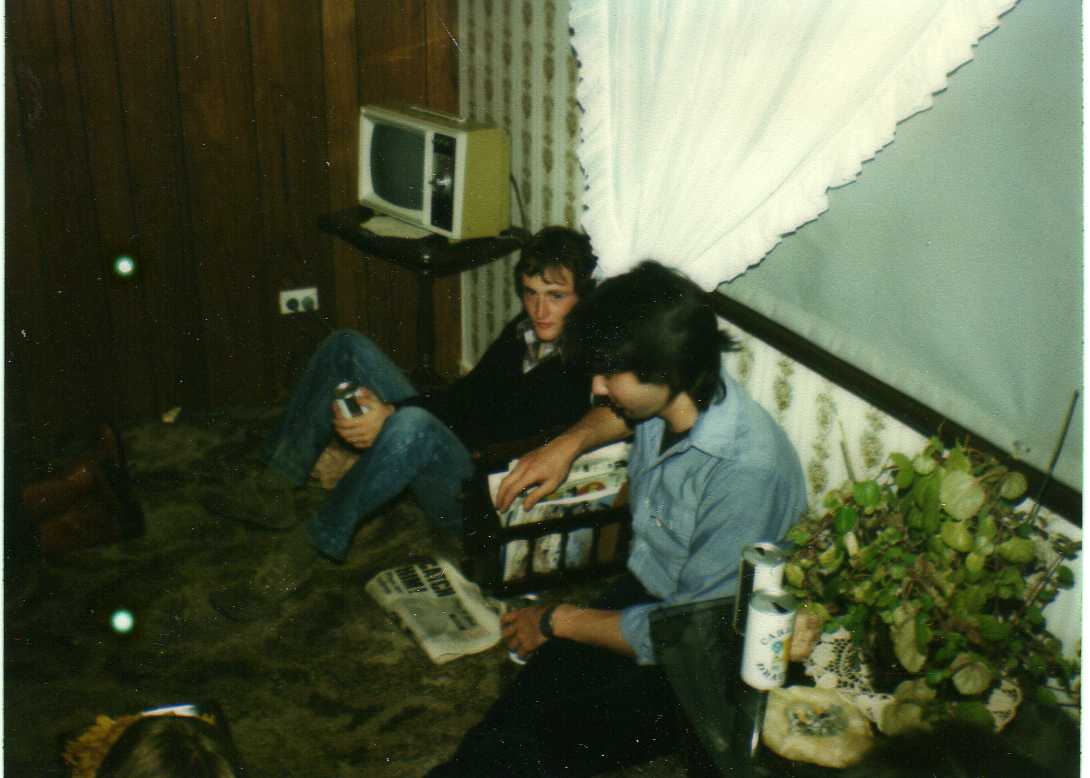 How do you measure friendship?
Who can you count on?
Genuine friends are hard to find – here’s a description of a man I’m proud to call my friend. 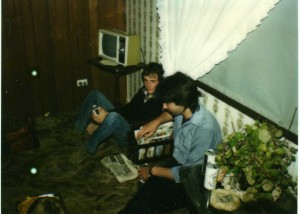 Above: At a party somewhere – we would have been 18

It’s been a very long time since I’ve seen Dean.  That’s what happens when life happens; good friends go their own ways.  Life and other catastrophes it sounds like a title of a movie.  But that’s what happens to friendships they get kicked to the gutter while life goes on around them.  It’s nobody’s fault, it’s the way it is.

I pull to the kerb and can see him working on a project at the side of the house.  Nothing has changed, not in close to fourty years.  He’s still busy fixing and making things and I’m still dreaming stuff up in my head and writing it down.  If like personalities are meant to be criteria for being friends we shouldn’t be, but we are.

I kill the engine and sit for a second, wondering when the last time was I actually had the opportunity to talk to him alone.  It was a long time ago. Gitta wasn’t going to school.  He was going through a rough patch.  I drove down from Ararat to see him.  We talked.  I think it was good.  I hope so anyway.

Now I’ve driven down from Ararat again. Now I need him to listen.

I know he will.  All I have to do is open up – something I’ve never been good at.

But he’ll listen if I let him.

I get out of the car and walk up to the gate he’s moved back into the garage so I open up and wander down his driveway.  Everything is immaculate, there’s nothing out of place – he must really wonder what I do with my time.

He comes out of the garage and sees me…and it’s just like we’d seen each other yesterday.  It just feels right.

We exchange pleasantries and talk about the work he’s doing.  It’s all precise, exact, and damn near perfect.  I’d like to be like that but I’m not.  No point trying.

He asks me in for a coffee and we’re still swapping small talk.  His hands shake noticeably as he prepares the coffee and he makes a joke about it.

I ask if he’s OK and he say’s he is.  The double vision has gone and he just has to put up with the shakes.  His shrug says it all – small price to pay.

So we sit and sip our coffees and talk; two old friends happy to have caught up after a long time and feeling comfortable in each other’s company.

He knows I didn’t come over two hundred kilometres to reminisce about old times or talk about Industrial relations, but he doesn’t pry.  He waits for me to spill my guts.

Then there is an opening and I open up.  I let it all out.  The dark glistening corrupting worm that has lain inside me for too long is spewed out in a stream of short sentences.  I tell him things I have dared not admit it fully to myself.  I speak of darkness and fear.

He nods.  He doesn’t judge, he empathises and offers his opinions and his experience of similar things in other times.
It is good.

We talk for a while longer.  He reaffirms that his door is always open and then he says the most amazingly simple thing.  “It’s always good to get up and see the sun shining.”  It is priceless.

Then it is time to go.  He laughs at my Subaru Brumby “Did you drive down here in that?  You’re bloody game.”

On the drive home I think about Dean and our friendship a lot.

I’d been at St Joseph’s nearly two years before we connected.  It was in art class.  We were meant to be making paper Mache models.  Dean and I discovered that if you used some of the tools to build a little slingshot you could flick the wet Paper Mache high enough to stick to the ceiling.  We thought it was hilarious and from that point on we just hung out together.

School is a place where alliances are formed and broken on a daily basis.  Loyalties are constantly tested.  We stuck thick.  I don’t know why, we just did.  We were both too intelligent to really fit in with the rougher guys although that’s where we gravitated, but sufficiently de-motivated to want to be seen with the academics and we didn’t like authority.

We developed a reputation for being for want of a better word, “bad.”  We weren’t, we just kept to ourselves and a small group of maybe five or six.  People didn’t get us.
I remember the class receiving a lecture from a teacher who said that there were two people in the room who were destined for Pentridge.  His eyes were fixed upon Dean and I sitting at the back of the class.  We thought it was funny.  He didn’t like that.

Dean left school at the end of Year eleven and I missed him like hell.

There were lots of other things going on in my life but I believe if Dean had of been at school his steadying influence would have prevented me from wagging most of the first term.  Even then he had bucket loads of common sense.

A year later and we were both out of school with the world at our feet.

I remember going out to the Trots one evening with him.  We drank too much beer, lost too much money and hitched a ride back in to town.  We landed at a little pizza café and spent an hour or so shooting the breeze, taking the piss out of each other and behaving like we were kings of the world.  It was a good night.  There’s no reason to remember it except for the fact that three days later, he was lying in a hospital bed in a coma after suffering a massive brain aneurism.  He probably should have died.
He was alone when it happened and he wasn’t found until sometime after.
It was a massive shock to those of us that were close to him.  We made every effort to visit him when he was well enough for visitors but it was a long haul.

One minute you’re nineteen, tough as nails with the world at your feet.  The next you’re pretty much helpless, struggling to put one foot in front of the other.  It wasn’t fair but nothing ever is.  I don’t know whether I would have made it back.  Dean did.

When he finally got out of hospital, he was a changed man, quieter, gentler and wiser but he stuck by his totally off the rails mad as a cut snake mate.

He got married early and life changed again for him.

But we still stuck thick.

I can only remember one argument we ever had.  It was my fault.  I was drunk and yelling at him about matters that I knew nothing about.  He tolerated me for a while and then snapped, grabbed me by the throat and pushed me up against the wall.  It was a total mismatch – he could have absolutely slaughtered me.  “Piss off,” he snarled and I left with my tail between my legs.  Twenty four hours later, he called around to my house and wanted to know if I was coming to the pub.  We never spoke of what had happened.

He couldn’t stop me from pursuing the path I seemed hell bent on choosing, but he watched out for me and tolerated my excesses better than anyone else.  When I finally decided to leave Geelong  he was the one person who bothered to ask why I was going and seemed to understand why.

Really, if I’m totally honest I haven’t seen much of him since.  He was groomsman at my wedding, is the godfather of Gitta and is always interested in my family and kids.

Five years or so ago he suffered a second aneurism.  He survived that as well.

He could be bitter and twisted but he isn’t.  He tells me that he is grateful to be living a fortunate life.

I’m proud to call him my friend.

3 thoughts on “Friendship and Sunshine”