My reaction to the film Bohemian Rhapsody 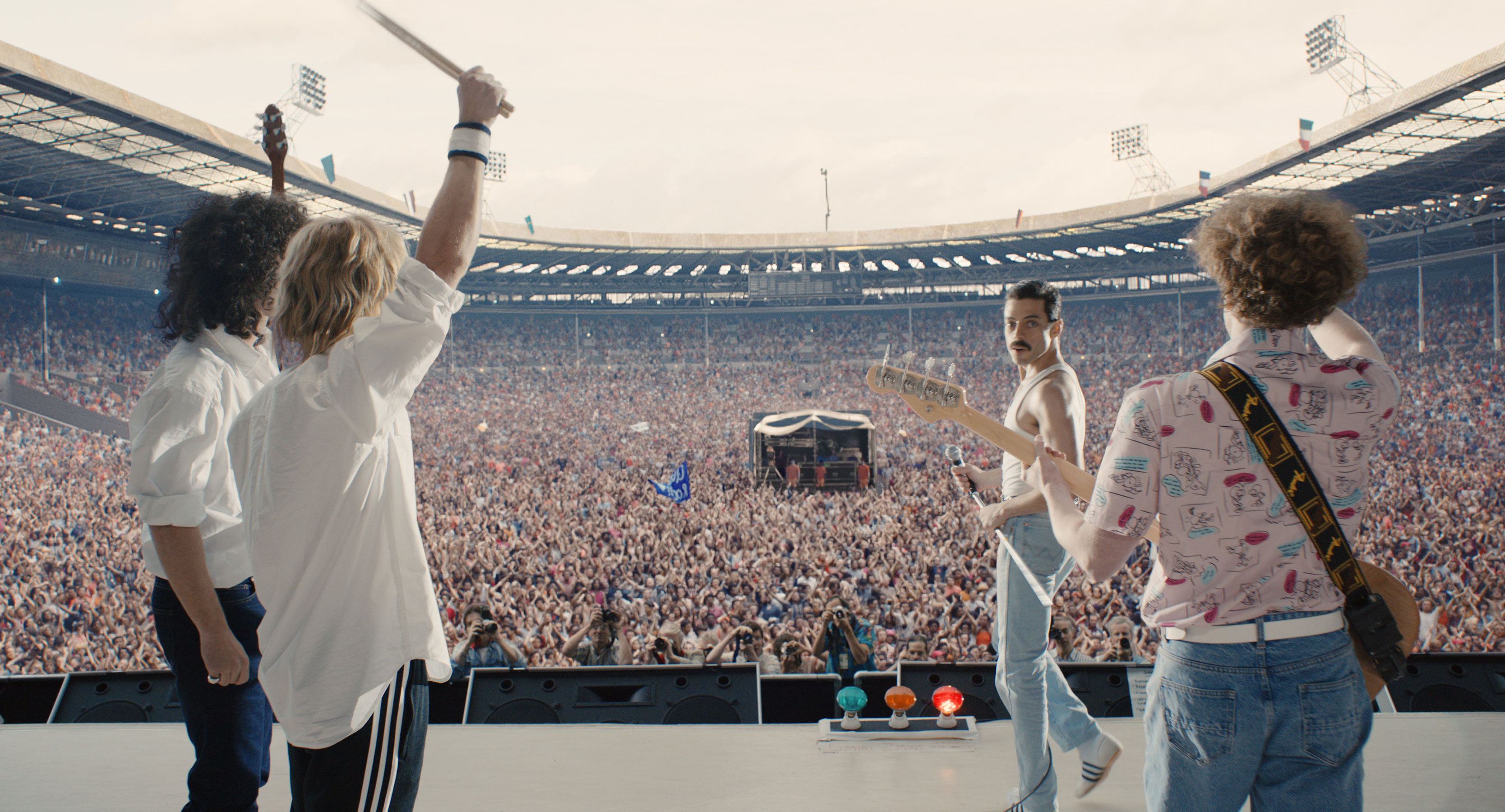 When I see a film I usually respond to it on nothing other than a superficial level.  Most films keep me entertained for the hundred or so minutes that they run and leave little to no impression.  Maybe that’s because as a once writer of fiction, I see where most films are going within the first couple of scenes.  Maybe it’s because most films have lowest common denominator type plots that are laden with some sort of Hollywood propaganda that I’m resistant to.  I don’t know, so when a film comes along that moves me I’m quite shocked.

Bohemian Rhapsody moved me and today I need to write about something else other than death, destruction and the lack of democracy, so here it goes.

But first here are some disclaimers.

I grew up in the seventies when Queen were at the peak of their powers.  I wasn’t a great fan at the time, own one album (Live Killers I think it’s called) that hasn’t been played for twenty years, liked Brian May’s guitar playing and loved singing Bohemian Rhapsody when I was drunk (which was a little too often as I recall).  As I’ve matured I’ve grown to like Queen more than when they were in their pomp, but they would struggle to ever make my day’s playlist.

As a rule, I don’t like pop nostalgia; it always seems to be a shallow shameless last ditch grab to mine the very last veins of gold from iconic acts of one form or another.  So with that in mind, it was with some trepidation that I handed over my hard earned cash to watch Bohemian Rhapsody.

And, I’m surprised to say that I liked it.

The film makes no bones about making the focus of the story Freddie Mercury (played convincingly by Rami Malek) and it portrays him honestly as a very highly strung, sexually conflicted risk taker that just happened to be a musical genius and consummate showman.

The film is book ended by what many see as Queen’s (and by extension, Mercury’s) finest hour – the twenty minute barnstorming performance at the Live Aid concert.  This enables the film to explore the creative energies and internal conflicts within the band as well as Freddie’s own personal journey that culminated in that performance.

As a piece of entertainment, Bohemian Rhapsody ticked all the necessary boxes, mixing humour, music and emotional drama to weave a tale that alternated between darkness, joy and ultimate triumph.

But good art in all its forms should make you think and the film did that for me.

It made me think about the sheer randomness of fate and how it applies to being successful.

At one point in the film, Mercury disparages the other members of the band, telling them that they would be nothing without him.  Later, humbled by personal failure, he is forced to admit that he needs them as much as they need him.

Without Queen as a vehicle, Mercury may well have been an eccentric, misfit that disappeared into obscurity.  Without Mercury, the very talented musicians within Queen may well have drifted into steady nine to five jobs and had the occasional jam for old time’s sake.

They weren’t mates – they fell together, coalesced and made great music.

Conversely without Queen, Mercury may still be alive; he would have undoubtedly come to terms with his sexuality, but may never have had access to the lifestyle that he allowed himself to be drawn into in Munich in particular and as such the risk of HIV infection would have been greatly reduced.

Swings and roundabouts are controlled by vagaries that we have little control of – the members of Queen came together by chance but that did not guarantee any type of success.

It isn’t enough to be a great musician like Brian May, nor is it enough to have a seriously impressive vocal range like Freddie Mercury.  You need that indefinable magic that sets you apart from the others –: that something is chemistry caused by working tension.  I suspect that all great bands have it and that all great team projects have something like it, perhaps even all great relationships have it.

Without give and take, to be given total free licence to run our own course is a path to disaster as evidenced by the film’s portrayal of the relationship between Freddie and the sycophantic Paul which leads Mercury down a lonely dark path where no brakes are put upon his artistic or private behaviours. The result is calamitous in more ways than one.

The other thing that really struck me about the film was that it really has an underlying theme of redemption.  Mercury’s speech to the band when he reveals that he is infected with HIV is simultaneously inspiring and heartbreaking.  “I don’t want to be a poster boy for their cause, nor a warning tale, I just want to make music until the day I die.”

I defy anyone to not be moved after watching that scene and then hear him sing the line – I don’t want to die, sometimes I wish that I’d never been born at all – in the final scene of the movie.
Freddie Mercury was a weird cat.  There’s no doubt about that.  It’s the weird cats, the rebels and misfits that always make a difference. And like all weird cats Freddie remained true to himself until the end.

In this respect the film is a fitting tribute to him.

Go and see it.