Mars anomalies  – what does it mean? There are a heap of YouTube video channels, social media groups and forums and UFO conspiracy theorist sites out there all making hay out of the term and thousands of people are poring over images beamed down from  the Curiosity Rover and earlier missions in search of :anomalies” – things that don’t quite fit the official version of what has been found on Mars.

Sometimes these findings make mainstream media – the walking man of Mars and the “Mars rat” are two examples that caused quite a stir. 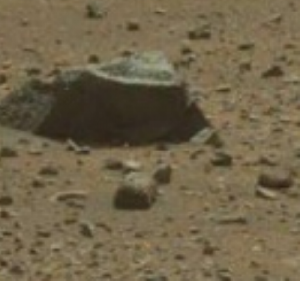 Mostly though, the anomalies are too inconclusive or too mundane to capture the community at large’s attention.  As Will Farrell at What’s Up In the Sky says “You see what you see – I see what I see.” A lot of what is seen can be tricks of light and shadow and to some extent is hampered by what has to be said is pretty ordinary picture quality.

That said, there are a lot of things up there that get you wondering.  Two years ago, I got right into this and was fascinated by an area called Rocks Nest which may have suffered from some massive calamity in the past.  It could be just a barren wasteland full of odd shaped rocks or it could be the ruins of something else.  Who knows?

Certainly the people at NASA aren’t going to indulge in speculations and they seem to have an interest in carefully managing the dialogue around Mars.  That could be simply because there’s nothing much to see there really other than a bunch of rocks, or it could be that they have serious reservations about acknowledging that Mars once supported intelligent life.  When you open that can of worms, it challenges many of our social  and cultural beliefs.

Many of us still stick to the belief that we (despite all our own self produced evidence to the contrary) are the highest form of intelligent life in the Universe.  To produce conclusive evidence that intelligent life once existed on our galactic doorstep would shake the foundations of our entire system.

When you start searching for this stuff you find all sorts of rubbish and wild conspiracy theories.  There are people and YouTube channels that will state that they have conclusive evidence of humanoid characters on Mars, there is one guy who will go frame by frame through images showing you how the real image has been Photoshopped out, there are other channels that will take you into realms of cheap science fiction.  But there are some really interesting and sincere people doing meticulous work.

One guy who’s work I’ve been following is the aforementioned Will Farrar at What’s Up In the Sky.  Will tries his darnedest to present objective analysis of some of the images that are freely available from NASA’s website and by  and large he does a good job.

He has pretty much convinced me that Mars was inhabited at one time and was hit by a meteorite sometime in the distant past.  His website and YouTube channel are well worth visiting.

The video below analysing the image supplied by Nasa  was done with limited resources and its a little rambling but hopefully it will encourage you to do some investigation yourself.

Fear is to be embraced

And the moment was gone