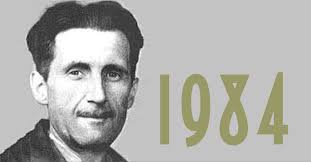 The psychological abuse that led to Winston succumbing was intense, constant and horrific.

Orwell got so much right, but he missed things that could not be imagined when he wrote the book the best part of ninety years ago.

He got the dumbing down of society spot on, along with doublethink, wrongspeak and the various departments of Truth, Love and Peace. I could make an argument that he pretty well nailed Goldstein as well (Just substitute Putin’s name) and while there is no such thing as the 2 minute hate you can achieve the same effect by spending a little time on Twitter.

But there is no Big Brother as such. In fact the very meaning of Big Brother was neutralised and somewhat trivialised by the emergence of briefly successful but utterly banal reality TV shows of the same name. I suspect that that was no accident, but I would, wouldn’t I?

But there is a megalithic gargantuan octopus that performs the role of Big Brother that runs undisturbed through our lives. Gargantuan is not an adequate word but it is the best I can do to describe this multi headed hydra that essentially rules our world.

I am speaking of course about what was once described by President Eisenhower as the military industrial complex . It encompasses all elements of what could be described as the establishment including political parties of all hues, trade unions,big tech, big pharma, big oil, corporations, mainstream news media, intelligence agencies, NGOs and brain dead celebrities programmed to remain on message and tell us how to think.

Our society has been collectively dumbed down to accept soundbites of narrative masquerading as news as fact. Simultaneously, we have been collectively programmed to accept the official narrative supplied by shady characters working for government bodies as incontrovertible proof. If we don’t we may be labelled as a conspiracy theorist, a loon or a nut job.

The world has become so upside down, so debauched and so conflicted that facts are dismissed as “debunked conspiracy theories” or Russian propaganda while narratives with holes in them big enough to drive an entire Panzer division of tanks through are held on to as fact.

You’re either in or you’re out.

You either believe the official narrative and sleep comfortably or you question every damn thing presented as news and assume nothing, believe nobody and check everything. Let the facts take you where they may.

By facts I mean verifiable source documents indisputable video footage or verifiable testimony that stands up under cross examination.

Mainstream media has always picked and chosen the news that we see and hear. It has never been totally independent of government. There are too many cosy relationships with “sources” to be truly independent and the few journalists who dare to stand against official narratives tend to end up working pumping gas or eking out a living writing and reporting independently. But for the most part they have managed to keep themselves operating at arms length from their masters. There has been the occasional slip up. The cheering on of wars is the most obvious, along with the ruthless persecution of any dissenting voices. For the most part the media play their role well, they rock you to sleep and tell you trust the people in charge who know best.

Occasionally a gremlin gets in the works and upsets the cycle. That’s when the media mask slips and you can see that it really is not impartial, and has no real interest in telling you what is really going on.

If most people knew the truth about the way our governments operate, there would be revolution on a grand scale, but for people to realise that they would a) have to be properly informed and b) have the time and will to investigate theses matters and draw their own conclusions. Neither of those things are likely to occur and the gremlins eventually get chewed up and spat out without most people taking too much notice.

In fact, most of the time we are tricked into cheering the demise of the few people who were trying to bring the truth to light. This has been going on for years and we have been routinely duped into seeing people like Julian Assange as troublemakers as they reveal uncomfortable truths that don’t fit comfortable views of the world. “Journalists” full of smug righteousness and lacking in courage, honesty or ethics feel free to take pot shots at Assange and smear his name without fear nor favour. We trust these people. What they tell us must be true and the truth that Assange and others have gone to great lengths to reveal is buried in noise and disinformation.

The crimes that Assange revealed go unpunished and unreported. If you are comfortable with this, you may have learned to love Big Brother. Similarly if you find yourself willing to believe the CIA, MI6 or any other western intelligence agency, Big Brother has taken your love and brutally consummated it while selling the footage to his mates.

If you hear screaming, it’s only me trying to wake you up. Big Brother will take care of it. You have nothing to worry about.