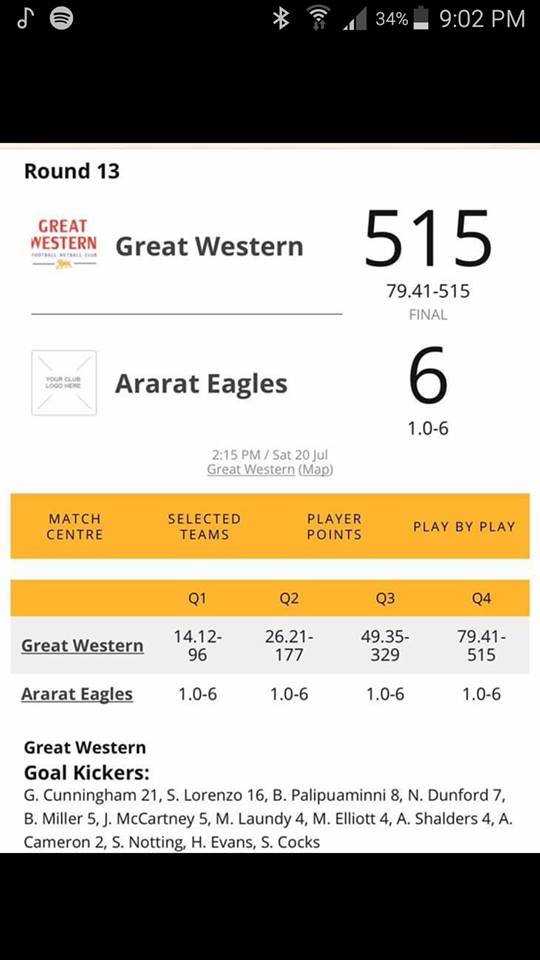 It’s no news to those of us who live in the area that the Ararat Eagles Football Club is struggling.  The writing was on the wall at the start of the year when the club put out a desperate call for players. I nearly wrote about their plight then. I can’t ignore them now.

Some of the major press outlets have noticed.  They’ve only noticed because of the scoreline on the weekend which was horrendous.

Beneath the score line their lives and still breathes a club.

A club held together by a few dedicated individuals  who in some cases are way to old pull on the boots.

I saw the  scoreline this morning. My heart sank.  I have no affiliation with the Ararat Eagles and in fact haven’t played football since I’ve been living in the Ararat area. But I understand the pain.

I’ve been there. I’ve tried to hold a sporting club together and went through all the stages of grief as the inevitable end drew near. There are no thank yous, no flowery speeches, just criticism and the odd snigger at the club’s plight. It is a death by a thousand cuts.

Players leave and can’t be replaced. Officials move on and no one steps up to take their place. It is a soul destroying death spiral squeezes every last drop of energy out of you.

There’s plenty of well-meaning advice given by people who have plenty to say but when it comes to rolling their sleeves up are nowhere to be found.  The last days of a sporting club are horrible. There’s a feeling of obligation to continue for the tradition and glory days that don’t seem that far away. If we can get through to next year things will be better, I used to think.

But next year never is better. It won’t be better for many reasons, but the biggest of these is simply demographics. Where we live there are fewer and fewer young people living in the area, meaning that there is a shallower talent pool to draw from.  With a shallower talent pool the differences between the stronger and weaker clubs become more marked. The better players go where the money is even if it’s just fifty bucks a game. Fifty bucks a game will cover the petrol and time required to travel the distances involved in playing in a country league.

The Mininera League which The Eagles  play in, covers a vast area. It is 104 km  from Ararat to Penshurst, 103 km to Derrinallum and 120 km to Hawkesdale. That’s a hell of a long way to go to get pulverized.

The Eagles were born out of the demise of the Ararat Football Association.  Teams like Caledonians, St Mary’s, Prestige and Trinity are mere memories. What traditions they had became  lost entirely or absorbed into the Eagles culture and now that culture appears to be on life support’

On life support – that’s the very phrase I used to describe my sporting club six years ago when it was clinging on to existence.  There was no white knight riding to the rescue. There was only a slow, agonising lingering death that eventually just had to be accepted.

I don’t know the Eagles officials personally.  I nod occasionally to club president Nats McRoberts in the supermarket but that’s about it.  But I feel their pain. I understand it.

These guys are heroes. They refuse to accept the inevitable and they keep fighting when everything seems lost. They deserve our respect but will probably get little .  It takes courage, sacrifice and an amazing amount of sheer bloody-mindedness to keep going. There’s no downhill skiers at the Ararat Eagles Football Netball Club. They are  long-gone, grazing on greener pastures but having no allegiance to anything worthwhile all worth fighting for. There’s a quiet dignity in standing for something even when the result is a foregone conclusion.

Australian rules football is a wonderful game. It takes skill fitness and courage to compete.

It is a game that when played well, can lay claim to be the very best game in the world.  Poor administration at an elite level has led to the continuing demise of country football and the AFL don’t give a shit.  The TV ratings remain strong, attendances for professional games continue to increase and there’s always a politically  correct cause to promote every other week. But the very lifeblood of the game, country football is slowly ebbing away. When it disappears, the golden goose that lays the eggs that make professional AFL such an irresistible product will be cooked.

If and when it does it won’t be people like the officials at the Ararat Eagles Football and Netball Club who are to blame. They did their best against incredible odds.

I hope that they survive – they deserve to.