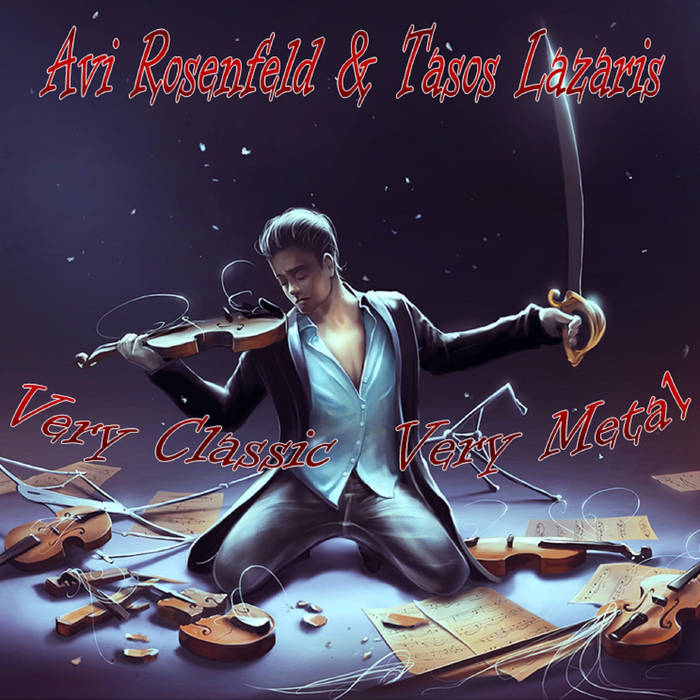 One of the great things about being an underground writer (So far underground that you’d need a mining permit to find me), is that you meet some really interesting creative people. Shortly after publishing my review of Deep Purple’s Turning to Crime, I was approached by Israeli guitarist Avi Rosenfeld to review his latest album Very Classic, Very Metal.
I agreed to do so without making any promises about what I’d write. It’s no secret that I regard the era that Avi’s album pays homage to as the golden era of hard rock. If you’re going to attempt to wade into that pool, you’d better be able to swim like a fish.

So. it’s with some delight that I can write that Very Classic Very Metal is good…very good.

Avi assured me that I would like what I heard. This is classic hard rock rewritten for today. If you’re a fan of Dio, Iron Maiden, Judas Priest, Rainbow or Deep Purple, you’re in for a treat here.

The album is attributed to Rosenfeld (lead guitar) and vocalist Tasos Lazaris. they’re supported by a range of musicians on keyboards, bass and drums. There isn’t a weak track on it. The musicianship is superb and the vocals are from the very top shelf. Here are my thoughts on each track

Oh wow. What an album opener. I couldn’t make up my mind if I was reminded of Dio’s Stand Up and Shout or We Rock. In the end, it doesn’t matter. This straight-up rocks. Lazaris’ vocals initially reminded me of Bruce Dickinson here and later on, I caught myself thinking of Doogie White. There’s no doubt he’s got some pipes. Rosenfeld’s guitar work here is really melodic interspersed with some fast runs that tease and promise more to come.

This has an epic quality about it reminiscent of Iron Maiden and Rainbow’s offerings in this area. At times you would swear Bruce Dickinson was doing the vocals. The guitar solo is cleverly structured and melodic. A very solid song.

A change of pace that shifts us possibly into the realm of Deep Purple MK3 or 4. This is a really interesting composition with a nice keyboard/guitar riff. The vocals sound different here. I’m reminded of Graham Bonnet and then oddly enough Glenn Hughes, it’s that Deep Purple Mk4 influence I think. Alcatrazz is another band that would be really at home playing this.

Track 4 By the Power of My Sword

A great opening riff has me thinking of Yngvie Malsteem and Iron Maiden simultaneously. The vocals are really impressive evoking memories of Rob Halford(Judas Priest) in his prime. The guitar playing here is sublime. It’s very melodic, interspersed with some awe-inspiring runs. This guy can really play. In my notes I have written, “combines the best bits of Blackmore with the speed of Malmsteen.” I don’t think that a guitar player can get higher praise from me than that.

The highlight of this track is the classic Hammond organ intro from Michael Berry. If you’ve ever heard the keyboard solo from Still I’m Sad from Rainbow’s On Stage album, you’ll be prepared. Overall the song is more reliant on the Hammond than any other track and it sounds reminiscent of something that Uriah Heap would have done. Other than that there’s a great little passage towards the end of the song where the keyboards and guitar play along with and off each other. Lord and Blackmore made their mark playing similar passages.

On the band’s Bandcamp site, Axel states that obtaining Deepest Purple was a life-changing moment for him. It’s fairly safe to assume that Ritchie Blackmore has been a major influence upon him and it’s pretty obvious here. The riff has a classic Blackmore feel. If you can imagine the splintering 4ths of Spotlight Kid and a progression that is close to No Release, you’ll get close to what this riff sounds like. The guitar solo seems to draw upon Blackmore as well. the vocals again are superb.

Track 8 Out of the Clouds

The guitar shredding intro here is a highlight while the vocals again remind me of Bruce Dickinson in full cry. This is a very good track.

Interesting synth opening is overridden by a catchy guitar riff that you’d be forgiven thinking a young Eddie Van Halen created. It just has that freshness that Eddie used to play with. Overall the song probably could be compared to Judas Priest in the late seventies/early eighties. This time the vocals again remind me a little of Graham Bonnet

Album closers can often make or break a record. This is the stand out track on the album. Maybe it reminds me a little of 7th son of a 7th son in feel but the case could just as easily be made for Stargazer – anything really with those snake charmer Phrygian scales.

This is the music genre that I grew up listening to when everybody else was into Punk or Disco. It’s what has always moved me, but I am pretty demanding about what I listen to. When done well, it can be brain shattering. When done poorly, it sucks. This album does not suck. It is delivered with confidence, style and a great deal of musicianship. If you like Classic Hard Rock, this album has your name on it.

As Mollie Meldrum used to say when recommending stuff nowhere near as good as this, “Do yourself a favour and get a copy of Very Classic Very Metal.” You can listen for free here. If you like this type of music these guys deserve your support