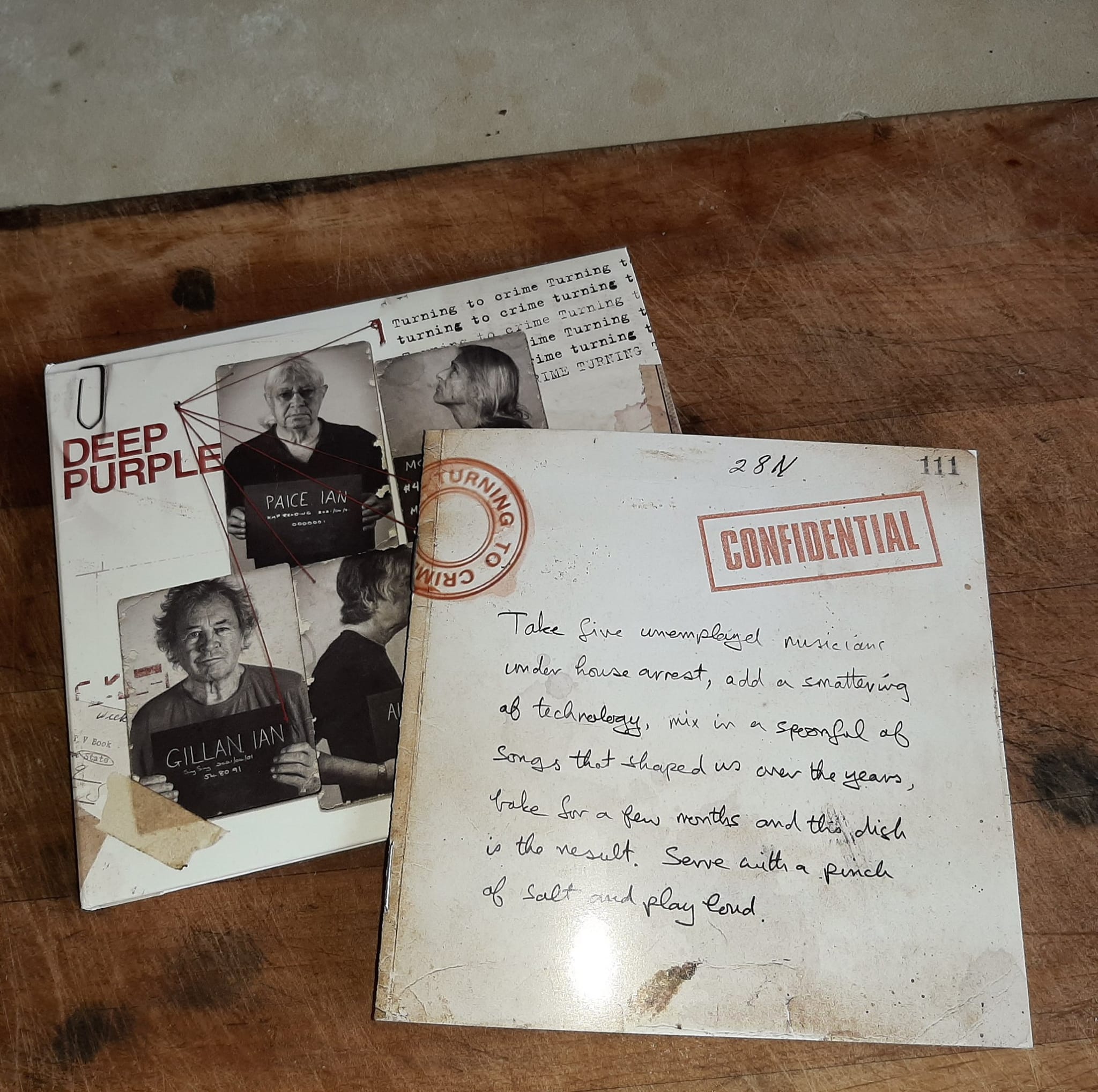 By my reckoning, Turning to Crime marks Deep Purple’s 23rd studio album. It is also the eighth album of what has become known as the Steve Morse era.

The album is quite a surprise in many respects, coming relatively quickly after the bands highly successful and prog leaning Whoosh and being full of cover songs. The album was recorded during the Pandemic with all band members recording their pieces at their home base. This again is a surprise, as Purple’s strength, whatever its lineup, has undoubtedly been the ability of the musicians to feed off each other. At times this chemistry has resulted in overblown pieces, but under the watchful eye of producer Bob Ezrin, the band has produced some stunning music over the past five years or so.

So why do an album full of cover songs?

The simple answer I guess is that there wasn’t a whole lot else to do.

Nevertheless Making Turning to Crime was a risk

Deep Purples legacy is built on the back of improvisation, chemistry and a willingness to not be pigeonholed. The Morse era has continued to surprise me with such diverse songs as Rosa’s Cantina, Watching the Sky, Kiss Tomorrow Goodbye, Nothing at All and the classic, Sometimes I Feel Like Screaming. From a career standpoint, there was simply no need to produce an album of songs done by other artists and yet they did it because they could. In typical fashion, the band perhaps suggest that the album shouldn’t be taken too seriously – Turning to Crime acknowledges that this is in a sense cheating.

The result is a mixed bag of music genres. My first listen didn’t really grab me. But the album has grown on me after several listens. Here are my thoughts on each track.

As an album opener this rocks. Ian Paice’s drumming is the standout. Someone should tell him that seventy-two-year-olds aren’t meant to be that active. Morse’s guitar work is its usual sublime self. Morse must be the only guitar player on the planet that can play 16 notes in the space of a sixteenth note and make it sound melodic.

This is one of those tracks that will initially test Deep Purple fans. There’s lots of brass in the song. Don Airey plays some nice piano and Morse’s guitar work showcases the man’s dexterity. All that said, I suspect that Ritchie Blackmore would hate this appearing under the Purple banner. One of the worst two tracks on the album in my opinion.

Way back in the dim dark 60’s Peter Green led a much more blues-oriented and rockier Fleetwood Mac. This song is smack bang in Deep Purple’s wheelhouse and they tear it up. The last-minute or so gives the song a really Proggy feel and Morse’s playing once again is the standout. Gillan’s vocal delivery on this is spot on. For me, this makes the album worth buying.

This is one of those tracks that took a couple of listens. It rocks along quite nicely. The louder it’s played, the better it sounds. I don’t know what Don Airey did to the sound of his keyboard on this but it sounds like a cheap Wurlitzer at a fairground. Otherwise, it’s a cool track and easy to dance to if that’s your thing.

Gillan really sings through his nose on this – which isn’t surprising, given who the original artist is. The song is OK. Airey’s solo is a standout and the short harmonising phrases with Morse are classic Purple. This song won’t be going on my playlist though.

Another challenge for DPs fanbase. Lots of brass. Gillan’s seventy-something voice really works well with this. Airey’s keyboard solo comes from the very top shelf, reminding us that he perhaps was one of the few people capable of replacing the deceased Jon Lord.

This is really interesting musically. I suspect that this has been included as one of Steve Morse’s selections. It’s good, but it isn’t in Deep Purple’s wheelhouse. One that takes a few listens.

This is cool and showcases the versatility of the band. Gillan almost sounds like Ozzy Osbourne in patches. Morse’s guitar solo is tasteful and restrained, while Paice’s drumming is phenomenal. Did I mention that the guy is seventy-two?

In my notes, I have one word written – why? The answer possibly lies within the fact that Roger Glover takes lead vocal duties. Glover is on record as saying that skiffle music was a huge influence on him in the early days. Lonnie Donegan released a skiffle version of this song in 1959. Understanding why it’s there doesn’t change the fact that this is the worst song on the album for me. They probably had fun doing it.

This is one of my favourites. My first impression was that it reminded me of Jethro Tull in a blues/rock mood. Morse and Airey again stand out with impressive solos.

This is one of my all-time favourite songs. Anyone who dares touch this had better know what they’re doing. Fortunately, Deep Purple know how to treat this song with the right degree of respect while putting their own stamp on it. Gillan’s vocal delivery has just the right touch of world-weariness and Morse’s guitar work acknowledges Clapton without copying him. Nice.

Track 12 Caught In The Act – Medley featuring snippets from the jeff Beck Group, Booker T and the MG’s, the Allman Brothers, Led Zep and the Spencer Davis Group

This is probably the track that Purple fans will appreciate the most. This largely instrumental medley contains pieces from Going Down, Gimme Some Lovin, Hot Lanta, Dazed and Confused and Green Onions. The band rocks on this.

Final thoughts about Turning to Crime.

For me, Turning to Crime sits in the lower end of the band’s catalogue, but it isn’t bad by any means. I don’t regret getting it.

One thought on “Turning to Crime Deep Purple -does this concept work?”