Why Political Correctness Has Lost Me. 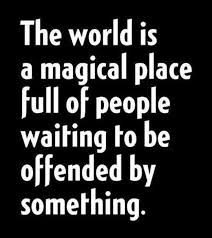 I think I’ve rattled a few cages and yet I am none of these labels.  What I am becoming is a non-aligned free thinker.  That makes me dangerous  to everyone from Andrew Bolt and Alex Jones right through to the social justice leftist keyboard warriors leading the righteous crusades against “hate speech” and “hurtful commentary.”

Most of my views align with socially progressive values.  That doesn’t necessarily mean that my views are right, nor does it mean that my mind is closed to hearing an alternate viewpoint.

For most of my adult life I’ve tacitly nodded to the demand of political correctness – mainly because the basic principles behind them are common sense.  All people are equal. Everyone deserves a fair go.  People have the right to work and be rewarded according to their ability. I don’t care what your race, creed, color or sexual preference is – frankly it’s none of my business.

That’s the “politically correct” view that I have no problem with. Of course, not everyone agrees with those basic principles and however much I disagree with their view, they have every right to express it.

And that’s where the thought police lose their collective minds.

It seems that unless you tow the party line you are the walking talking embodiment of Hitler himself.

It doesn’t matter what the circumstances are.  If you step on the politically correct viewpoint you’re fair game.  Never mind facts.  Never mind morality.  Forget about tradition.  Just worry about “feelings.”

These social justice worriers  fret about Trump overfeeding Koi or writing a mysterious tweet like “cov fefe.”  They will work themselves into a frenzy over third and fourth level “issues.”   But they won’t batt an eyelid at the systematic destruction of Libya.  Nor will they protest at the death by drone policies instigated under the Obama regime.  It seems that political correctness only applies to one’s political enemies and that people in other parts of the world don’t count.  They’re just cannon fodder.

It’s time to clean house and it has to start on the left side of politics.

The Worldwide Problem Of The Political Left.

The left has a massive problem.  In a word – it’s hypocrisy, but I think it’s much deeper than that.

The Corbett Report’s “Why Big Oil Took Over The World” underscores my point.

Essentially the left has been played by politicians who moved to the centre.  Think Tony Blair, Bill Clinton and to a lesser degree the Hawke/Keating years in Australia.  These politicians made clear decisions to sell working people down the river.  They took their votes for granted and transitioned their working class parties to appeal to the “liberal elites.” As time has progressed the only point of difference that the left has from the right is it’s “progressive stances.”

Couple this with a continual trumpeting of political correctness and people have become conditioned to concepts like “Hate speech.” Ever so gradually the, unthinking left supporter has become conditioned to a “right” way of thinking.  It is simply inconceivable to think otherwise.  A Trump supporter is characterised as “deplorable.”  A Brexiteer is seen as insane.  In Australia,  Hansonites are derided as morons and racists.  In every single case the people who the left now officially deride are working class people.  How did that happen?

The Betrayal Of The Working Class

I have said to friends on several occasions that the greatest enemy is the one hidden in your own ranks.
Bill Clinton betrayed the working class in numerous ways, but the most infamous was abolishing the Glass Steagall act.
Tony Blair preferred the company of bankers and social liberals then the down and dirty union officials who fought the good fight against Thatcher’s extreme punishment of the working class.
Hawke and Keating along with Bill Kelty handed Australia the accord which sold working people short.

In doing so these “champions of the left” alienated their base.  The very reason that their political party is there in the first place.

Jeremy Corbyn offers a breath of fresh air.  Bernie Sanders may have led a revolution if the Democratic Primaries weren’t so obviously fixed.  In Australia, we’re still waiting for a champion of the working class from the left.  Shorten should be, but seems too closely wedded to big business for my liking.

Political Correctness Is The Trojan Horse Of Big Business

He who controls the narrative controls the world.
Working class people have borne the brunt of “economic reform” for the past thirty years.
Wages in real terms have been cut.  Working conditions have detiorated.  Union membership is at an all time low.
Jobs are outsourced to overseas countries.  Cheap labour arrives in the form of immigrants.  Secondary Industry has moved offshore.
When people question tarriff reduction or immigration.  They are variously described as Xenophobic, Racist and bigoted. The vertitable basket of deplorables.   Economic rationalism is the new religion.

The left has allowed this betrayal to happen while it champions socially progressive issues.

It’s time to clean house.  We can start by encouraging free and open debate – no matter how uncomfortable that might be.

One thought on “Why Political Correctness Has Lost Me.”