Why People Like Michael Rowland Are More Dangerous Than Ross Cameron

Ross Cameron just lost his job on the altar of political correctness.  He has been judged in the court of social media, found guilty and terminated.

Those who heard the Cameron’s statement on air in context believed that the comments were not racist and were in fact satirical in nature.  Cameron himself, said, ““If you read the comments in their totality represent the single strongest defence of the Chinese made by any public figure in Australia for the last several months. There was absolutely no intention to offend, but I am happy to apologise for it, for anyone who has taken offence.”

That’s it, Ross – thanks for everything. On your bike mate -stirrers, misfits and malcontents have no place on air.  All you have to do is say the wrong words at the wrong time and you’re yesterday’s fish and chip wrappings.

But Ross Cameron already knew that, and I suspect that he knew that somewhere at sometime the thought police would get him in the end.  I don’t always agree with Ross, but I love his in your face attitude and preparedness to say what he actually thinks.  He always made me think. We can’t have that.

There is a way that everyone must think.

Our media overlords see to that and they ever so gently push, prod and poke us to accept the proscribed orthodoxy of the day.

When Ross Cameron was sacked there was a rush of virtue signalling do- gooders and keyboard warriors celebrating the fact.  You would expect that.  There’s nothing as virtuous for the myopic hordes as celebrating a heretic’s demise.  A heretic who regularly champions the underdog and the anti establishment narrative.  Such heretics cannot be tolerated.

But, what still amazes me is how alleged journalists like ABC Breakfast presenter Michael Rowland are all too willing to join the chorus.

Upon hearing the news, Rowland couldn’t restrain himself tweeting “About .Bloody. Time.”

At the time of writing 2300 of Rowland’s followers approved his message.

I bet Michael Rowland feels good about that – 2300 little pats on the back for commenting on a fellow journalist losing his job.  How noble.

But we are talking about Michael Rowland.  This is the guy who wants to give a gold medal to Ecuador for cutting off Julian Assange from the outside world. 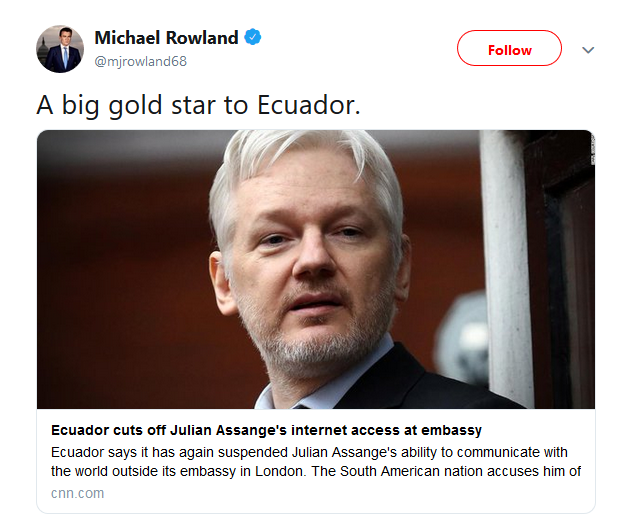 Michael Rowland and people like him are much more dangerous than Ross Cameron using a few choice adjectives to describe a race of people. (Adjectives I might add that were in common use a decade ago and still liberally used by people of my father’s generation) Michael Rowland is an influencer – he whispers sweet nothings in his viewer’s ears and assures them that there is no bogeyman hiding in the closet, it’s just a shadow.  Whereas Ross Cameron gets up opens the closet, drags the bogeyman out gives him a good kicking and then suggests that you find another room to sleep in.

Rowland assures you that everything will be OK and can be piled into neat little packages that include Good citizen, sexist, misogynist, homophobic, racist and “tolerant.”  He enables laziness and discourages thought or investigation.

Just listen to the authorities.  They have all you need and if you dare question their narrative Rowland and his smug media buddies have a label for you, a label that will categorise you with the 21st century equivalent of leprosy –that label is conspiracy theorist.

Once you’ve got that label they feel justified in either belittling or ignoring you.

Of course anyone who doesn’t comply with orthodoxy is fair game on every front.  The mainstream media are experts at finding “victims” and “perpetrators.”  They love a scenario where they can paint misfits like Cameron as bogeymen all the while ignoring the daily abuse of power by those who are in control.

Rowland has been President of the Melbourne Press Club.  He claims to be a serious journalist and he sneers at people like Ross Cameron.  And yet, he is a cheerleader when it comes to the daily torture and abuse of a journalist like Julian Assange.

I can’t reconcile that.

But he cheers on the establishment torture anyway.  What courage.

Rowland is an influencer – he either chooses to not tell the truth or he is too lazy or ignorant to acquaint himself with it.  He and his ilk are truly dangerous because he does not want you to see facts that upset the narrative.  He cheered Cameron’s dismissal because Cameron was an irritant who continually squawked about the injustice being visited upon Julian Assange among other things.

Cameron has been a strident defender of Assange and regularly appears on the Unity4J global campaign to free Julian Assange.  He annoys the thought police who would have you believe Assange is a Russian sympathiser who smells and can’t control his cat.

So, just when Assange is in severe mortal danger, the only journalist with the courage to speak for him is swept aside by a crusade based upon quoting remarks out of context by anonymous “nobodys” and the whole process is cheered by vaccuous “personalities” like Rowland.

The timing is curious to say the least and leads one to wonder what the real reason for the crusade against Ross Cameron was.

Truth is inconvenient.  It is ugly and at times it is awkward.

We don’t need boring, smug entitled lecturers telling us what  and how to think because when we do, we are surrendering our very humanity to the hive mind of the neo-liberal/con (they’re the same thing in the end) agenda and that’s terrifying.