How I Intend to Participate In The Great Democracy Illusion 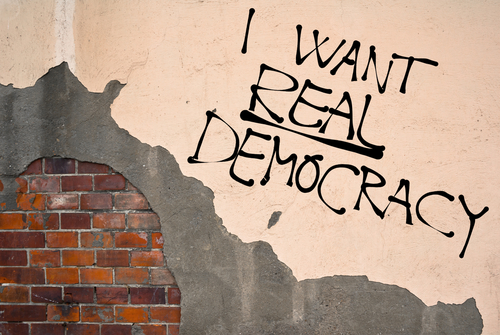 I would have cared once.

Now, I’m looking forward to exercising my democratic right in the following manner.

I will politely take the how to vote cards from all party representatives. I don’t care who they represent.  They care enough about something to be treated with due respect.  The fact that they still believe and care is miraculous.  I was passionate once about a party’s cause.  I get where they’re coming from even if I can;t buy what they’re selling.

Once I enter the voting hall, I’ll chuck all those cards in the bin.  Then I’ll line up and get my name checked off the voting register, take my ballot papers and wander over to one of the voting stalls.

I care deeply about democracy and everyone has the right to vote how they please.

That is what I will do.

I will take my pencil and cross out all the names on the ballot paper. Some of these people are good people.  Some of the parties have noble ideals.  Good people and noble ideals get crushed by Machiavellian backroom boys prepared to do whatever it takes to maintain the status quo.

Sadly, there is no political party that represents me.

None of them possibly can until they stand up for my countryman, Julian Assange.  I don’t see that happening any time soon.

That’s because, in reality, democracy does not exist in this country.  Our politicians are held hostage by their masters in the USA and United Kingdom.  They have been since Whitlam was unceremoniously dispatched in 1975.

We are a vassal state with the illusion of democracy.  Once you see it for what it is you can’t unsee it.

So, after striking a line through each name, I will write in another.

It is the name of someone I believe in.  Someone brave enough to stand up for what is right regardless of the cost.

That name is Julian Assange.

My vote will be counted as informal.  It does not faze me in the least.

Australia’s abject failure as a sovereign democratic country represented by its desertion of Assange leads me to conclude that if my vote did matter, it wouldn’t be allowed anyway.

If there is a change of government my progressive friends will look at me in the same light that Democrats look at Susan Sarandon.  If Labor hangs on my conservative friends will tell me that I wasted my vote.

As if any of their votes make the slightest difference.  Someone will win, someone will lose but the wheels within the vaudeville show that is politics will grind on relentlessly.

Australian democracy is an illusion.  It’s time we saw it as such and started again.