The Assange Indictment Mistake That Was Not A Mistake 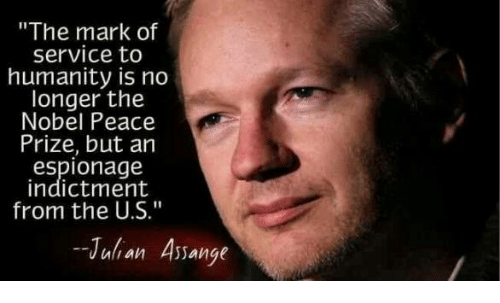 I’m seriously pissed off right now about so many things it doesn’t matter.

Not at all and that’s because the “mistake” vindicates Assange’s position as well as my own and many other independent commentators on the subject.

Julian Assange is and always has been a target of the various operators of the dark arts of government within what we rather innocently call western democracy.  Many knowing and unknowing cheerleaders for these practitioners have ridiculed Assange and his supporters for his retreat to the Ecuadorian embassy in fear of his safety.

They can no longer do this, for Assange and his supporters now have clear evidence that he is a target for rendition to the USA, where he would be subjected to interrogation methods made legal by that new found champion of the Democrat party – George W Bush (seriously you can’t make this shit up).

This much is clear and no amount of denial, creepy matey jokes about Pamela Anderson or distraction by the Australian government can hide their utter hypocrisy and cowardice in the face of their masters.

No one can now say “Assange is free to leave the embassy at any time.”

This stark reality has forced some mainstream journalists to finally realise that Assange’s situation is the first domino in the curtailing of free speech.  Some have begrudgingly begun to admit that an Assange indictment would be a dangerous precedent.

Some have – some though have seized upon this revelation as evidence that Bob Mueller is about to bring the hammer down on the Trump campaign for Russian collusion and they’re cheering the indictment.  These people are stupid.

Freelance investigative journalist, Tracy Beanz has put together an interesting break down on who was likely to have filed the indictment and she does a pretty good job of it – I highly recommend that you take the time to watch it.

No one seems to be asking the question that seems most obvious to me – and that is was this “mistake” really a mistake and if it wasn’t what purpose does it serve?

I can’t believe it was a mistake.  Any one who takes a second to think about this would know why.

We are talking about a legal indictment.

The document would have been checked and rechecked before filing – it simply isn’t a clerical error and I would suggest that Assange’s name is placed somewhere in a document pertaining to someone else then the whole document is probably inadmissible – wouldn’t you think.

Furthermore one of the first “news outlets” to start publicising this mistake was the CIA mouthpiece the Washington Post.  Was this a coincidence?  I don’t think so.

Someone planted that “mistake.”

They wanted to send a message and the message wasn’t necessarily to Assange or his supporters – Assange is for all intents and purposes neutralised.

Was this “mistake” timed to distract or deflect from other news?

Was it meant to give succour to the flagging hopes of the Russian collusion acolytes?

Was it meant to demoralise many Trump supporters who believe Assange should be freed?

Was it meant to silence those who continue to speak out for Assange and Wikileaks?

I haven’t got a clue, but I know this – it’s given Assange more sympathetic publicity in the past week than he’s enjoyed for several years.

I don’t think that was the plan and that gives me the faintest whiff of hope.