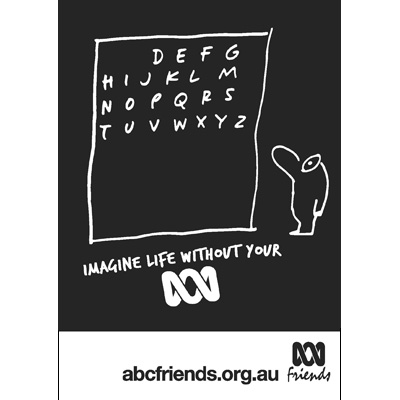 For most of my life, I have regarded the ABC as an Australian national treasure.  I bought the 19c a day campaign.  I bought the independent and fearless line that it’s high profile current affairs shows implied.

I grew up watching 4 corners, listening to AM in the mornings and appreciating the news analysis and commentary.  I believed it to be fair and balanced.  Perhaps it was, or perhaps I just wasn’t awake.

Over the past decade little things began to jar.

There was very little subjective analysis of the Iraq war.

Obama was given a free pass for going soft on the banks.

Anyone questioning the official narrative on anything ranging from trade to foreign policy or social issues was categorised with one of the weaponized labels used to stifle dissent.

I started to wonder what the ABC had become.  However, I would have continued rely upon them if it wasn’t for their abject failure when it came to covering the US election.

Clinton, Trump, Assange and Russia It’s All In The Narrative

That’s when they let the masks slip.

From the get go, the ABC made it clear that the Democratic Primaries were a victory parade for Hillary Clinton.  They presumed she would sweep into the Whitehouse.  It would be a triumph for style over substance – another box ticked in this era of virtue signalling. The world’s first female president.

Any criticism of Clinton or the Democratic primary process (which stunk to high heaven) was dismissed as right wing propaganda and  kicked to the curb.  She was their girl.

I’m sorry.  I thought a journalist’s job was to report facts and follow evidence wherever it led.

Enter Julian Assange and a trove of emails that portrayed a side of Hillary Clinton that didn’t fit the narrative.

But, the smug journalists sitting in their comfortable jobs still believed she would win.  No one bothered to dig into those emails.  No one bothered to look beyond the hopelessly conflicted polling, the seriously disenchanted progressive base and the fact that Trump’s message was resonating with middle America.  No one understood the serious doubts people harboured about Clinton’s foreign policy (Libya).

She was their girl.  History would be made.  They were positively salivating at the prospect.

She lost.  Then everyone lost their shit.

How could this happen?  Who was responsible for this outrage?

The DNC had an explanation that the ABC reporters latched onto without question.  It was Russia and Assange working together to undermine their champion of symbolism.

Perhaps the lemming like response from the journalists at the ABC could best be summed up in one moronic retweet from award winning journalist Sally Neighbour.

“Assange is Putin’s bitch and we all know it.”

The tweet said more about Neighbour and by extension the ABC then it did about Assange.

There was already a body of evidence being assembled to suggest that the emails that were published by WikiLeaks came from a leak as opposed to a hack.  But Neighbour “knew” differently and she wasn’t about to let Assange off the hook.

No one asked her where her evidence was, or how she formed that conclusion.  Her colleagues never called her to account and many seemed to agree with her.

How could a group of well educated, highly literate people so easily adopt a hive mind mentality?   They’re meant to be journalists.

I was still pondering this when Sara Ferguson, made one of the most embarrassing contributions to “journalism” this country has ever seen.

Ferguson’s fan girl interview of Hillary Clinton was cringe worthy.  So much so that real journalist, John Pilger singled her out in a blistering column penned for New Matilda.

Ferguson was either incapable of or unwilling to challenge Clinton on a plethora of misstatements. It has to be said that Ferguson is not a novice.  She is a senior journalist who should be beyond sycophancy.  When it comes to Hillary Clinton and the Russia, Russia myth, Sarah Ferguson does not do herself justice.

I am left asking why.

It’s a question I ask constantly when it comes to the ABC and it’s coverage of the Trump presidency, anything Russia related or Julian Assange.  I find myself asking the same question about the ABC’s reluctance to report on the worsening protests in France.

As I’ve alluded to, these people are not stupid.

They’re either being fed information by “reliable sources” or they’re willing participants in a disinformation campaign that would do Josef Goebbels proud.

Either way, I’m left with the conclusion that the ABC is conflicted, lazy  and easily corruptible.  In short, they appear to have been consumed by the Deep State.

The Deep State Knows No Boundaries

The concept idea of the deep state is not new.  President Eisenhower alluded to it when he warned against the growing power of the military industrial complex.  However, he could not have imagined the scope, scale and size of the Deep State in its present form.

To think the Deep State is a shadow government within a country is to severely underestimate it.  The Deep State is not one thing.  It is an idea that crosses borders, mixes bureaucracy, with intelligence agencies, big business interests and media outlets.  It works to subvert democracy by legitimising practices, concepts and belief systems that keep power within the hands of a chosen few. Orwell would have called it Big Brother.

Acolytes are recruited, fostered and championed.  Dissidents are pilloried, smeared and ostracised.  In this world you have to get along to get along.  Australia is not immune.

Nor is the ABC.

It’s journalists are testimony to that.

There is much evidence of ABC journalists running Deep State propaganda narratives.  Several that come to mind are:

It is clear that the ABC can no longer be trusted to simply report facts.  It would seem that journalists have become accustomed to being spoon fed a narrative and then regurgitating it.

The only question remaining is this.

Has the ABC been infiltrated and corrupted or is it simply misled?  In other words, to paraphrase Sally Neighbour, has the ABC become the Deep State’s bitch?