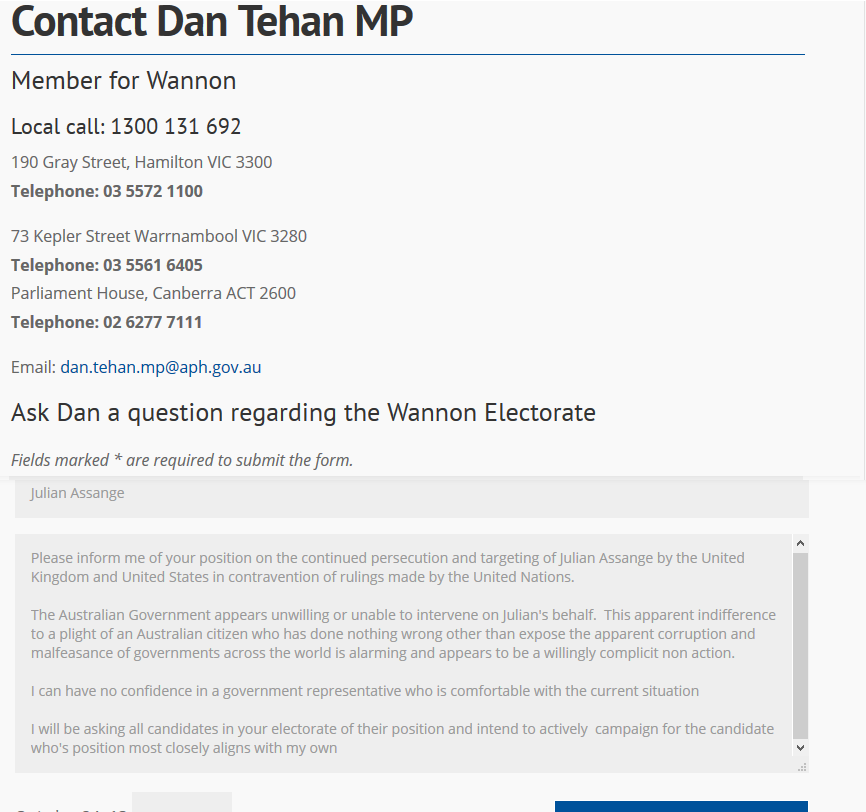 At the time of writing, there is genuine fear circulating among Assange supporters. Ecuador have been making noises about handing Assange over to the UK (ostensibly for a bail violation but in reality to extradite him to the US).

There has been a unified response from supporters on both the left and right attempting to halt this miscarriage of justice and for the time being all is well.

It won’t hold. There are too many vested interests who have become obsessed with not only neutering Julian Assange’s voice but silencing him.

Of course, the mainstream media remains wilfully silent on the true nature of Assange’s plight and would have you believe that he is wanted in connection with Hillary’s emails, Russian collusion or some other bullshit.

What he is wanted for is embarrassing and exposing the United States in a series of leaks generally and specifically in relation to the collateral murder video that was published by WikiLeaks on April 5 2010.

To cut a long story short, Assange’s position as an Australia citizen and journalist has been progressively eroded by a systematic and endless disinformation and smear campaign by various intelligence agencies including the CIA, MI6 and other Five Eyes intelligence organisations. Gutless or perhaps conflicted Australian politicians have allowed Assange’s status as an Australian citizen to become at best academic. Lazy and perhaps conflicted Australian journalists have been all too willing to parrot various government agency lines without doing any analysis. The establishment latte sipping, social justice campaigning left deserted Assange when he published the Clinton emails.

It has been left to a few outside voices to continue to attempt to raise Australian awareness of Julian Assange and his continued torment. Those voices have their followers but by and large go largely unreported and ignored by legacy media.

Right now, as Julian Assange’s last vestiges of freedom are threatened, the corporate puppet who calls himself Prime Minister is mulling over an election date. Most good judges of these things expect that date to be in May. Most good judges also expect that the corporate puppet who currently leads the major opposition party will become Prime Minister whenever the election is held.

The Australian people are confronted with the classic either/or choice – or as Assange himself once put it – a choice between cholera and gonorrhoea.

Neither major party, nor the Nationals or Greens have the slightest interest in individual freedoms, let alone the fate of a troublesome truth teller who keeps embarrassing powerful friends. They see”the big picture”- a picture which inevitably involves more centralised power, less choice and plenty of lucrative trade deals that benefit everybody except the people they pretend to represent.

It will ever be so – unless we the people force change.

Change can be forced – it can be forced by opting out of the left/right paradigm and choosing instead to vote for candidates on an up/down model. Up – means empowering people to have the freedom to reach their potential and the freedom to know the truth. Down – means controlling people with more and more legislation and censorship.

There is no greater measurement of a politician’s standing on an up/down axis then asking them a simple question.

Do you support Julian Assange?

There can be no ifs no buts – it is either yes or no. If the answer is yes – there are a myriad of follow up questions to ask.

How do you intend to free him from his current situation?

What will you do to help him leave the Ecuadorian embassy as a free man?

What pressure has been brought to bear by the Australian Government on the UK and the US to back off our citizen?

If the answer is no – there’s nothing more to discuss. The politician will not act in freedom’s interest.

The sad fact is that Julian Assange will not be an election issue – not unless you make it so.

I intend to ask every candidate in my electorate their position on Julian Assange. I will use their responses to determine my vote. I will also ask each political party what their official stance is and vote in the Senate accordingly.

I don’t care what a party’s policies are on anything else – of a candidate can’t pass my basic up/down axis test they cannot be trusted with anything else.

I started my campaign today.

I challenge you to do the same because Assange should be an election issue. If you let these bastards get away with persecuting him, they won;t stop there.

Bad things happen when good people do nothing