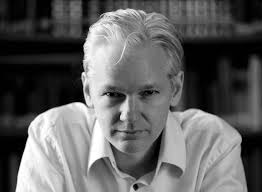 I’m staring up incredulously at an earnest young man telling me and the scattered Assange rally “crowd” that the young people of Australia are uniting behind Assange and that revolution of the working class is all but assurred.

I don’t know what he’s been taking, but I want some, because what I’m seeing is depressing the shit out of me.

Despite this sincere young man’s assurances, I see no hordes of outraged youth ready to storm the barricades. In fact, I hardly see anyone at all, let alone passionate youth brimming with righteous anger. There’s a scattering of ageing socialists, the odd middle aged libertarian, a bevy of bored looking cops, the odd full on anarchist and perhaps a dozen or so concerned individuals who might be termed “ordinary Australians.”

This Assange rally is pitiful.

This is Assange’s home and you would get a bigger rally at the induction of the Sandringham Under Ten’s Footy team. I want to go home. This is not going to get the job done.

I’ve seen the crowd at the rally in London. I’ve seen Roger Waters , John Pilger and a couple of other names making a stand. I look around and see no names, other than Caitlin Johnstone and she wouldn’t mind me saying that despite her outrageous talent, she is in the scheme of things, just a bigger nobody than the rest of us.

But I stand and listen. To leave would be treacherous. The next speaker is talking about local groups getting together as collectives. There’s much talk about “the working class,” “imperialism,” and the “evils of capitalism.” Occasionally, the air is punctuated by cries of “shame” by well placed individuals who cried the same word at the last rally at almost identical points. It feels contrived. At one point I start to feel like I’ve stumbled into a rehearsal of a Monty Python sketch made all the more absurd by the sincerity of the speakers. I respect and admire these people for standing up and stating their points of view but I can’t help but feel that this is a shit show. We have a barn door to aim at and we’re doing a pretty good job of shooting ourselves in the foot.

Then, Caitlin takes the microphone and for ten or so brief minutes the place is transformed. She speaks of the injustice and the clear stark choices that the world is faced with. She speaks in clear concise terms of right, wrong, good and evil. It is all done with passion, conviction and clarity. She takes the complicated politicisation out of a simple injustice and lays it all out in clear stark terms. It is a brilliant speech, that should have been heard and applauded by thousands. Instead she generates a cheer from a couple of hundred.

Caitlin is still a believer. She believes that the monstrous injustice can be undone. I almost believe her. She is that good.

Then she steps down and normal programming resumes. The rally peters out with a whimper and I’m left disillusioned and sad.

What is wrong with this place?

I believe in Australians. We’re by and large a pretty decent bunch who love the underdog and believe in the fair go. So, where is everybody?

You can’t be outraged by something you don’t know about. That is the problem in a nutshell. People just don’t know. They aren’t told. There is no Roger Waters daring to speak up. We don’t even have Pamela Anderson to fly the flag. We just have the well meaning, idealistic Socialist Workers Party and a few bloggers.

Other than Ross Cameron playing to a miniscule audience on Sky News (and we know what happened to him) there has not been a single clear consistent voice stating Assange’s case. Instead we’ve had constant parroting of the disinformation campaign against Asange from all media channels. Assange is a Russian agent, a rapist, responsible for deaths of soldiers, a traitor and of course responsible for the rise of the orange man ad nauseam. If you repeat the lie often enough, it becomes truth.

Nice work Australia. How did that happen?

It happened because the media is concentrated in the hands of a few. The ABC is populated by leftist elites who despise Assange and everything he stands for. The major TV stations rely heavily on CNN and the BBC for international news. Major newspapers like the Sydney Morning Herald and the Age get their American news syndicated straight from the Washington Post – which has for all intents and purposes become the public relations arm of the CIA. After that we’re left with the Murdoch Press – and they’re not likely to give Assange the time of day.

What this country needs is a maverick that will stand up and shine a light on the truth of Assange’s situation. If Roger Waters can do it, then someone here can. Exept that they won’t. There’s nothing to be gained from standing in the way of empire. Arias and Logies are much more important.

Many years ago, I was inspired by the passion and enthuisasm of Midnight Oil frontman, Peter Garrett. Where is he now?

Garrett sold out the moment that he joined the ALP. He swapped his convictions for convenience. It didn’t get him far, but it bought his silence. Now you never hear him, other than to speak on some politically correct cause that he won’t get any push back on.

I heard him speak at an ALP function a couple of years ago. His righteous anger and determination to change the world were replaced by glib platitudes and on point messaging framing everything in terms of left and right. Maybe that was the real him. Perhaps his younger persona was just an act. Then again, maybe he sold his soul.

I see no one else.

We’re screwed. We swallow social programming messages from people like Waleed Ali and snide digs at Assange from puppets like Michael Rowland and we don’t even know that we’re being shafted.

It’s shameful, pathetic and sad. Meanwhile, Assange is faced with the might of empire armed with nothing but the truth. He won’t be getting any meaningful help from his own dunghill and that is infurating.

I have no idea how to fight this apathy. I can only hope that the movement abroad grows legs and that the politiicans and the grifters in the Australian media smell the winds of change and jump on board. It’s a faint and forlorn hope.

All power to Roger Waters and those who stand with Julian Assange.