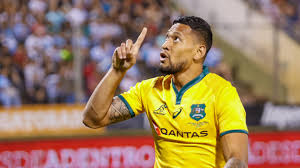 Amidst all the hand-wringing finger pointing and  allegations of media bias in relation to the Australian federal election result there has been little analysis of what may be a sleeper issue in our society.

During the election campaign a prominent Rugby Union player, Israel Folau had his player contract cancelled  by the sports governing body for “hate speech”.

Folau,  a devout Christian committed the unpardonable sin of quoting a bible verse that called upon various “sinners” to repent.   I think there were 5 or 6 different groups listed in the particular verse and I believe that I like most Australians could have been a member of at least three of the groups.  Like most Australians I was not offended.

Unfortunately for Folau, one of those groups that the Bible listed were homosexuals.

We could spend all day discussing the merits of the Bible verse in question but regardless of what you think, it is a Bible verse and forms part of Folau’s  faith. It is apparent that Israel Folau meant no offence and that the particular tweet was made in good faith by a man who is strong in his beliefs.

The twitterverse went into meltdown as did the holier than thou left dominated media.

Folau was condemned as a bigot, homophobe and an all round nasty piece of shit.   Nothing less then he’s figurative crucifixion would suffice.

It was a fait accompli.   The media and the Twitterati  we’re given their head on a stick as Rugby Australia determined that Folau’s conduct constituted a breach of contract  warranting his dismissal. It is fair to say that this news was greeted with much self-righteousness and pompous sermonizing  from what could be described as the soy latte sipping smugly superior left wing of the media pack.

Sure there is an argument to say that Folau’s tweet  could have contributed to some people feeling marginalised.   However it is drawing a longbow to suggest that one tweet in isolation would contribute to the rapid deterioration of anybody’s mental health.  Twitter is literally full of messaging extolling the virtues of many forms of sexuality. None of these messages apparently are considered offensive by Christians, or maybe it just doesn’t matter.

It also beggars belief that anybody of any sexual persuasion  would be surprised by a Christian proclaiming what he believes to be the truth.   I can’t help but wonder what the reaction would have been if Israel Folau practised a  different religion and sent the same message.

It must be stressed that the ALP (socialist left party)  made no comment in relation to the matter nor did the Conservative Party.   However, to you use another phrase from the Bible, when you lie down with dogs you get up with fleas.   Like it or lump it, the ALP, a party formed by workers for workers in this country is closely associated with  the intellectual soy latte sipping left. It is a cross that they must bear.

When Election Day arrived,  the ALP was expected to win comfortably.   The gains that they were expected to make in suburban Melbourne and Sydney did not eventuate. They were spanked in outback Queensland and in parts of Tasmania.  Very few political pundits saw this coming.

As the dust settled and gloom descended upon the LP some of the smartest strategists amongst them recognised that they had a  credibility problem with Christians. This is a major problem as according to the last census conducted in Australia over 52% of Australians identify as Christian. while many of this number  may not have set foot inside a church for decades it is fair to say that a large proportion still take their faith seriously – seriously enough to perhaps sway their vote.

Ignoring this demographic is foolhardy,  arrogant and ultimately political suicide.  No amount of virtue signalling tolerance can overcome this fact.

The ALP wondered how this alienation of Christians  had come to pass. I suspect that they need look no further  then Israel Folau political correctness and what many believe to be  the persecution of Christian belief by the soy latte sipping left.

It seems that the Christian base will no longer turn the other cheek.

Rather than condemn people for their core beliefs it is time to engage with people and have honest conversations that discuss all points of view.

We all  don’t need to be  on the same page.  In fact it would be terrifying if we were.  Australians were once famous for their tolerance and acceptance of everyone.  It would be nice if those days would reappear.