Did Australia Spy On The Trump Campaign 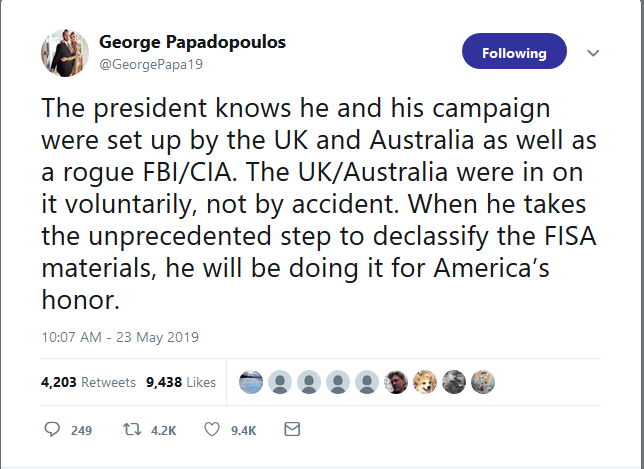 One of the very interesting and largely ignored aspects of the entire Trump collusion delusion farce is the insistence by George Papadopoulos that Alexander Downer and by extension Australia were actively involved in spying on the Trump campaign.

Most Legacy media journalists refuse to investigate Papadopoulos’ claims.   That’s a red flag right there. Trump himself has alluded to Australia being involved in a campaign to spy upon him.   Again legacy media have either ridiculed or ignored the claim. That’s the same legacy media who all too easily swallowed the Russian collusion narrative in one bite.

It now appears apparent that some level of spying was conducted upon the Trump campaign.   Attorney General William Barr has made this clear and has indicated that he wants to investigate the matter further to ensure that there was legitimate reason  for such action to take place.   In further developments  it has been revealed that recently appointed special investigator John Durham  is investigating foreign non-government interference in the 2016 election.

It has to be remembered  that one of the reasons that Rod  Rosenstein  vehemently opposed declassification  of FISA related material was to protect sources and methods.

Its tempting to take  educated guesses about some of those sources and methods.  The notorious Stefan Halper is one such source whose role is unclear and warrants further investigation.  Special counsel Bob Mueller stated that Halper was a Russian asset yet much work has been done by independent researchers to demonstrate that this could not be further from the truth. In reality Halper  appears to be a Western intelligence asset

Mr Halper  of course is said to be  the man who told Papadopoulos that the Russians had thousands of emails pertaining to Hillary Clinton.   Alexander Downer alleges that Papadopoulos passed this information on to him. Papadopoulos denies doing so.  That’s curious.

it is clear that either Mr Downer or Mr Papadopoulos are lying.   I honestly don’t see what Papadopoulos can gain from remaining in the spotlight and insisting on his version of events.   I am then left to wonder at the role of Mr Downer.

I find Alexander Downer to be an extremely intriguing individual.

Most Australians remember him as a lightweight stumbling bumbling politician who, through a series of missteps became the leader of the of the Liberal Party ( conservative)  in Australia. Downer appeared no match for the prime minister Paul Keating and was dumped after a brief period of high comedic value.

When the Liberal Party swept to power under the leadership of John Howard Downer was appointed foreign minister.    It has to be said that he took to the role with enthusiasm. He was either seriously incompetent or breathtakingly devious.  While Downer was foreign minister the department of Foreign Affairs was responsible for

He was also accused of not passing on intelligence reports received prior to the Bali bombings in 2002.

True to form,  Mr Downer sailed through these scandals with little discomfort.

Shortly before the Howard government defeat in 2007 He initiated bilateral high level security talks with the People’s Republic of China.

His rather unimpressive career as a politician hasn’t held him back at all.   He sits on the board of British strategic intelligence, Hakluyt,(a strategic intelligence advisory firm founded by surprise, surprise former MI6 officials)  Huawei (now there’s a name in the news),the UK think tank, policy exchange  and is a non-executive director  of CQS (which has an interesting history) and yellowcake PLC ( a specialist company operating in the uranium sector) -not too  bad for someone who was widely regarded in the electorate as a lightweight and a bit of a joke.   The joke was always on Australia.

In many ways Downer fits the stereotypical privileged born to rule old private school boy image that is so easily parodied, mocked and ridiculed by his political opponents.  It’s a cunning disguise. Downer is no fool.

Downers father, Alexander senior was also appointed High Commissioner to London and for some reason that isn’t clear, was awarded the prestigious honorary title of Freeman of London.

A quick perusal of Alec senior’s history suggests that he was a serious player.

In fact the Downers have always been serious players for as long as Federation at least.

Alexander Downer presents as a buffoon but he certainly isn’t.   Accidents and coincidences seem to happen around him. I suspect that they’re not accidents.

It is clear, given Downer’s connections in business and government that he would have more than a passing interest in the result of the 2016 election.   I am reminded that George Papadopoulos claims that Downer was aggressive and rude at their meeting. Papadopoulos is adamant that Downer was spying on him

So what in the hell is going on?

I have no answers only questions.   Questions it seems that the Australian legacy media is disinterested in asking.

As an Australian,  I have a general feeling of uneasiness in relation to this matter.   For some time now I have held the view that the investigation into the Trump campaign was largely a speculative fishing exercise  designed to discredit and dis-empower the incoming president. If this was correct Downer’s role either witting or unwitting becomes pivotal.

Did  this strange concurrence of coincidences just happen or was it planned all along?   If it was set up Australia has a real problem.

It could be perceived that is Australia were actively involved in a campaign to ultimately interfere in the electoral process of  the United States. That would be at best an act of sabotage at worst an act of War. If this is the case those responsible for Australia’s part in this attempted coup have acted against the best interests of Australia put the ANZUS treaty at risk and may even be guilty of treason.

My eyes remain fixed on Barr, Durham and the inevitable full release of all Russiagate material.