Could Jared Beck Be America’s Voice of Conscience? 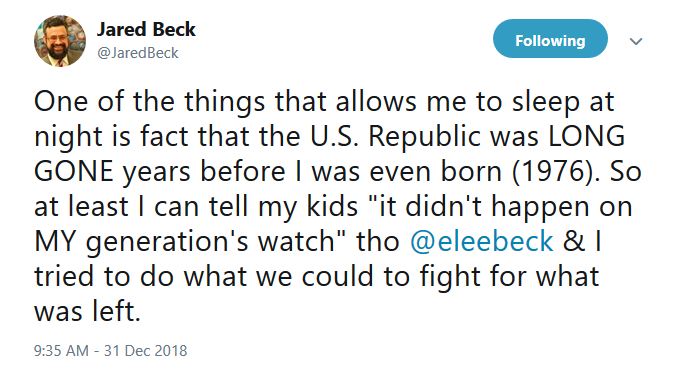 Jared Beck and his wife, Elizabeth are two of the very few precious voices of reason in the quagmire that masquerades as debate within American political discourse. Unfortunately most people are so locked into their own echo chambers of reality that they can’t or won’t hear them.

That’s sad because the Beck’s have something to say that needs to be heard.  It’s a sad indictment upon the American media and society in general that they are marginalised and ignored.  Elizabeth copes with the wall of silence fairly stoically.  Jared copes a little differently.

There are people that claim to be “woke” “red pilled” and aware and then there is Jared Beck.  He’s one helluva angry voice.
I mean take no prisoners suffer no hint of fools angry and he has every reason to be.

Like many people, the Becks were alienated by the behaviour of the DNC which confirmed for those of us aware enough to think that democracy in America was deader than the dodo.  Unlike everybody else (with a few exceptions) the Becks decided to do something about it.

They mounted what is known as the DNC lawsuit.

It should have been massive news.  Apparently legacy media aren’t aware of the action or simply don’t care.

The case has caused both Beck’s their share of stress and fear.  So much so that in June 2017, they petitioned the U.S District court in Florida for protection for the DNC case plaintiffs, counsel and families.

Despite their obvious fear, the Becks have continued to fight the case and have recently concluded oral arguments in an appellate hearing in the 1th Circuit Court of Federal Appeals

They should be national heroes.

Hardly anybody knows their name.

Jared Beck has every right to fell aggrieved.

He uses Twitter as a vehicle to give vent to his frustrations.

It portrays a man who has come face to face with the beliefs that he has held dear and found them to be false.

I understand how Jared feels although I don’t profess to have  endured what he has. I know that once you tear  the mask off the democracy zombie and see the putrid mess beneath, you simply can’t stand those who pretend that everything is OK.  I get that.

What Jared has to say everybody should hear.  He could be America’s voice of conscience.But, I hate to say this.

Jared Beck is so far ahead of everybody else that his anger as alienating many people who could benefit from his insight.  I understand why.

He is impatient for meaningful change and thirsts for justice.  He is ahead of the curve.  I hope that he allows everyone else to catch up.

I think, aside from Julian Assange, Jared Beck is one of the very few people in the Western World who understands how bad things really are.  Very few ever will get to his level of understanding.  Hopefully, one day in the not to distant future, there will be enough to make a real difference.

It is people like Jared Beck that can help people get there a little sooner, if only he’d let them.

You can read Jared Beck’s Book what happened to Bernie Sanders? by visiting Amazon